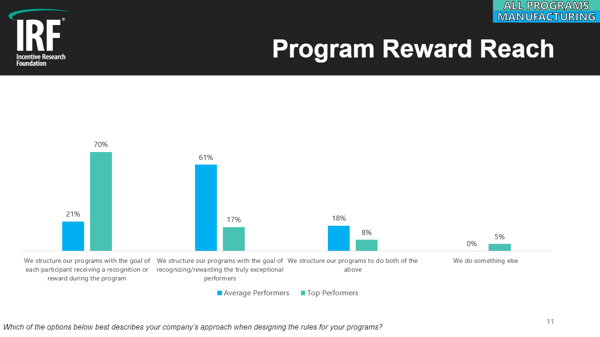 Are You a Top Performer?

In August, the Incentive Research Foundation, IRF, conducted a study of how top performing manufacturing companies differentiated themselves as to how they view and manage their non-cash employee recognition programs. As of 2016, 84% of U.S. businesses utilize non-cash incentives and rewards as a method of retaining and engaging their employees.

If you’re wondering if you qualify as a top performing company, here are the criteria IRF used to classify top performers from average performers:

According to the IRF study, the following findings demonstrate how top performing companies view their employee recognition programs:

Differences in How Top Performers Manage Their Programs

The purpose of the study was to identify a clear link between employee recognition best practices and overall indicators of company performance. The study also reported that businesses are increasingly looking to outside partners for expertise on how to most effectively structure their reward and recognition initiatives.

If you’re not yet a top performer or if you are and want to stay that way, we can help.  We helped a major organization achieve the 2015 Best Overall Recognition Program Award sponsored by Recognition Professionals International.  This award is given each year to the organization that achieves the highest scores in all seven Best Practices Standards in their employee recognition program as identified by RPI.

We could do the same for you!  Give us a call.